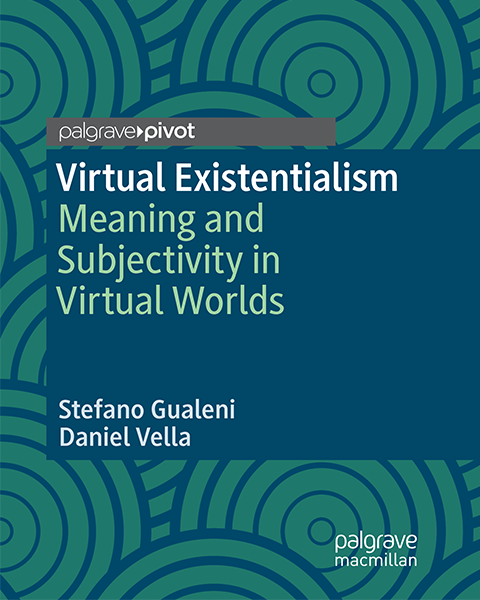 How do experiences in (and of) virtual environments affect the ways in which individual human beings understand and attribute meaning to their own existence? Virtual Existentialism adopts a variety of scholarly perspectives in the combined attempt to understand and answer that question.

The book’s drive is twofold. It uses existential philosophy as a frame through which to understand and interpret the significance of virtual environments in the context of our existence. At the same time, it considers how our capacity to be in (and towards) these technologically mediated domains might lead to new understandings of the concerns of existential philosophy.

In this pursuit, Virtual Existentialism is firmly grounded, not only in philosophical works of existentialism and phenomenology, but also in philosophy of technology, virtual worlds research and game studies. articulates several perspectives from which virtual worlds can be understood as existentially (and even evolutionarily) relevant. Specifically, it claims that, in virtual worlds, human beings can reflect on their values and beliefs, take on new subjectivities, explore previously unexperienced ways of being, and take reflective stances towards their existence and their subjectivity in the actual world.

Virtual Existentialism introduces the notion of ‘virtual subjectivity’ to describe our being in virtual worlds, and discusses the experiential and existential mechanisms by which can move into, and out of, these virtual subjectivities. It also includes chapters containing focused engagement with the thought of Helmuth Plessner, Peter W. Zapffe, Jean-Paul Sartre and Eugen Fink, and their relevance to thinking through the existential significance of the virtual. 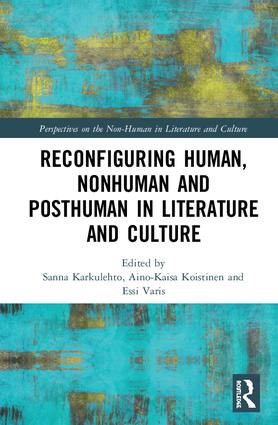 Reconfiguring Human, Nonhuman and Posthuman in Literature and Culture is a new book from Francis &Taylor.  It collects different kinds of readings of the nonhuman in literature and other media.  I have a chapter in it titled Playing the Nonhuman, which approaches the theme from the perspective of the phenomenology of computer games.

You can read the abstract below and find a copy of the whole chapter from my website.

What is it like to play a nonhuman character? In his classic essay, philosopher Thomas Nagel (1975) argues that we are fundamentally unable to imagine what it is like to be a bat, because our senses and cognition are structured in a way that is uniquely human – whereas bats’ senses and cognition have a uniquely bat-like configuration. In spite of this, media genres from fantasy to science-fiction routinely strive to imagine and show what it could be like to be something other than human. What is more, different media achieve this effect by different means: literature provides textual descriptions, audio-visual media rely on moving images, and comics employ different kinds of multimodal compositions, as discussed in the previous chapter.

In the fifth chapter, Jonne Arjoranta continues investigating these medium-specific imaginations by examining how video games portray the nonhuman, what kind of assumptions they make about being nonhuman, and what kind of tools and techniques they use to convey the (imagined) experience of nonhumanness. The analysis focuses on Aliens vs. Predator (2010, Rebellion Developments), which features three different but intertwined campaigns that allow the player to play as a human, an alien, and a predator. The game thereby evokes two playing experiences that are supposedly nonhuman, and enables direct comparison between them and the “normal” experience of playing as human. The discussion around these playing experiences is further complemented with examples from other games that present playable nonhuman characters and, like the previous two chapters, draws theoretical support from the notion of embodied cognition. 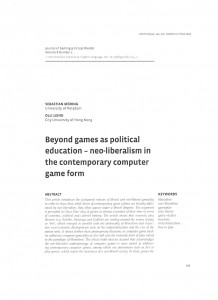 Möring, Sebastian, and Olli Leino. 2016. “Beyond Games as Political Education – Neo-Liberalism in the Contemporary Computer Game Form.” Journal of Gaming & Virtual Worlds 8 (2): 145–61. https://doi.org/10.1386/jgvw.8.2.145_1.
Abstract
This article introduces the juxtaposed notions of liberal and neo-liberal gameplay in order to show that, while forms of contemporary game culture are heavily influenced by neo-liberalism, they often appear under a liberal disguise. The argument is grounded in Claus Pias’ idea of games as always a product of their time in terms of economic, political and cultural history. The article shows that romantic play theories (e.g. Schiller, Huizinga and Caillois) are circling around the notion of play as ‘free’, which emerged in parallel with the philosophy of liberalism and respective socio-economic developments such as the industrialization and the rise of the nation state. It shows further that contemporary discourse in computer game studies addresses computer game/play as if it still was the romantic form of play rooted in the paradigm of liberalism. The article holds that an account that acknowledges the neo-liberalist underpinnings of computer games is more suited to addressing contemporary computer games, among which are phenomena such as free to play games, which repeat the structures of a neo-liberal society. In those games the players invest time and effort in developing their skills, although their future value is mainly speculative – just like this is the case for citizens of neo-liberal societies.